Here is Why Warriors or Sicklers are Different! 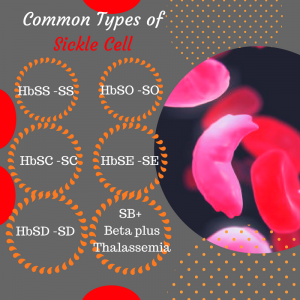 Sickle Cell SS and Sickle Cell SC are two different conditions that relate to abnormal protein mutations in blood cells. For one to know if you have either of these conditions and how to treat it, it is important for you to see your doctor and run a test. As stated above, these two conditions are caused by a mutation in the blood cell protein called hemoglobin. There are two genes for this protein (you inherit one from each parent), which is why there are two letters associated with this condition.

If one of these genes is mutated to the “sickle” form, denoted ‘S,’ but the other gene is normal, the person with these genes are said to have sickle cell trait and generally experiences no medical issues and even has a slight resistance to malaria. However, if both genes are mutated to the sickle form, denoted SS, then this is called sickle cell anemia or sickle cell disease, and his or her blood cells can clump together, causing a blockage of blood flow, putting this person at risk for pain crises, bone degeneration, and priapism (prolonged, painful erections).

SC variant is when one gene is mutated to the S form (as mentioned above) and the other is mutated to the C variant, which is also abnormal. Again, people with just one hemoglobin C mutation do not experience any medical issues from it. Even if both hemoglobin genes are mutated to the C form,  only mild anemia results. For people with one S and one C mutation, called sickle cell-hemoglobin C, they have fewer episodes of their blood cells clumping together than do people with SS, so they have less pain or crisis, they also have more significant degeneration of bone, retinopathy (degradation of the retina), and increased risk of experiencing priapism.

Again, visit your doctor if you suspect that you have either of these conditions, in order to be appropriately tested for them and treated if necessary.