Osteomyelitis: A huge threat to Warriors! 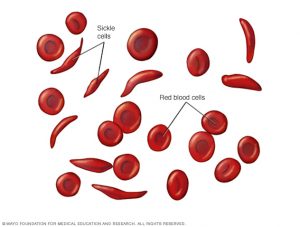 Osteomyelitis is an infectious stage of bones associated with distinct clinical microbiology. In sickle cell anemia, an early detection and diagnostic accuracy of osteomyelitis would establish an immediate treatment module for preventing bone destruction and deformity. This mini-review highlights the different diagnostic tools and courses of treatment involved in the accurate diagnosis of osteomyelitis.

In approximately 50% of acute osteomyelitis cases, blood culture is considered as an essential tool for correct diagnosis of the infection [1]. The gold standard tools for the diagnosis include bone biopsy test with histopathological examination and tissue culture, (both aerobic and anaerobic bacteria culture). Another study showed the implementation of radioisotope imaging for detecting acute osteomyelitis. Among all the detection tools discussed MRI is considered as an efficient tool for the diagnosis of osteomyelitis in SCA patients.

This mini-review aims at creating awareness about the wide range of symptoms and appearances for accurate diagnosis and appropriate treatment modules.

Sickle cell anemia (SCA) is an autosomal recessive genetic disorder characterized by the synthesis of defective hemoglobin (Hb) known as sickle hemoglobin (HbS). HbS formation results from single amino acid substitution at position 6, where glutamic acid gets replaced by valine, in the β globin gene. Abnormalities in both the β globin genes, either heterozygous (i.e., combined with other abnormal hemoglobins such as hemoglobin C [HbSC] or β thalassemia [HbS-thal]) or homozygous (HbSS), leads to the development of the disease. However, an individual may exhibit sickle cell trait without resulting in anemia, if he/she has a combination of both abnormal (HbS, mild form of disease) and normal gene (HbA) (Ejindu, et al., 2007). SCA affects millions worldwide; especially, it is widespread among the people with ancestral origin from sub-Saharan Africa, Saudi Arabia, Spanish-speaking regions, India and Mediterranean countries [2].

Under low oxygen concentration, red blood cells (RBCs) that contain an abnormal form of Hb become deformed (or sickle-shaped) and rigid. This impedes their ability to pass through microcirculation, with frequent clotting and thrombosis. The consequence of the obstruction is the production of ischemia and infarction. Infarcts are the outcome of infarction, which are small localized areas of dead tissues. These can affect several organs of the infected person, including brain, lungs, bones and spleen, and are also responsible for most clinical manifestations. Tissue infarctions, generally referred to as vaso-occlusive crisis (VOC), are present as pain or swelling. VOC is the most common and earliest forms of clinical manifestation, which is frequently observed in the pediatric population [3-6]. Previous researches showed higher susceptibility of SCA children towards a rare form of osteomyelitis, i.e., Salmonella osteomyelitis. Immunodeficiency caused by splenic dysfunction, tissue infarction, and excess iron content leads to increased risk of osteomyelitis [7-9].

VOC and osteomyelitis are roughly identical in the acute stage, and both are associated with a rise in C-reactive protein (CRP) level and erythrocyte sedimentation rate (ESR). For this reason, establishing the correct diagnosis is essential so as to assist in the formulation of an effective treatment plan. Diagnosis of osteomyelitis is achieved through physical examinations and standard laboratory tests like positive blood culture or joint aspirate, but negative blood culture does not exclude the diagnosis of the disease [9-11]. In addition, magnetic resonance imaging (MRI) is also considered as an effective tool in the diagnosis of osteomyelitis [11,12]; however, they are not always readily accessible due to cost or unavailability. Ultrasound (US) scans have been used in the diagnosis of osteomyelitis in SCA patients, showing sensitivity of 74% and specificity of 63% [12-14]. The aim of this mini-review is to summarize the different diagnostic tools for the detection of osteomyelitis in SCA patients that would assist in its treatment.

Bone infection is a serious complication in SCA and a major cause of hospitalization. Previous researchers have reported that SCA patients become very susceptible to unusual organisms in which a preponderance of salmonella-caused osteomyelitis has been observed [15-17].

Bahebeck, et al. [18] reported that the relative rate of complications in osteomyelitis was almost 13%. There is a decrease in the quality of life due to the morbidity of chronic osteomyelitis in association with varied effects of hemoglobinopathy. In addition, there are many factors that lead to a high frequency of infection in these patients. Hyposplenism is an important factor that follows infarction, which mainly occurs during childhood, and subsequent fibrosis [19]. Medullary bone infarction and necrosis creates an apt condition for bacterial growth and spreading. Furthermore, frequent hospital stays might lead to increased exposure of the patients to certain pathogenic bacteria strains [20].

Osteomyelitis is commonly seen infection affecting the tibia, diaphysis of femur and humerus, along with the infection of the vertebras. The infection is hematogenous in nature due to its delayed onset. The most common casual organism is Salmonella (especially Salmonella enteritidis, Salmonella typhimurium, Salmonella paratyphi B, Salmonella choleraesuis andSalmonella aureus) followed by Staphylococcus aureus, which is seen in 10% of patients suffering from sickle cell-related osteomyelitis. Certain other causative bacterial species are Enterobacter spp., Haemophilus influenza, and Escherichia coli[1,21,22] (Table 1). Bacteremia caused due to the gram-negative microbes is believed to result from sickling within the mesenteric vessels and subsequent gastrointestinal infarction [23]. Moreover, the leg ulcers often lead to the direct spread of the infection [7].

In SCA, osteomyelitis diagnosis can be a major problem for health providers, where unsuccessful identification of the disease may end up with severe bone damage and life-threatening infection. As mentioned earlier, osteomyelitis affects mainly the long bones, but other bones may also be affected. Patients with osteomyelitis may suffer from pain, swelling, fever and increased flow of inflammatory markers in the blood serum. This shows parallel characteristics with that of painful bone crises, which makes differentiation of bone infarction a difficult task [7].

Laboratory tests for the detection of osteomyelitis are usually nonspecific; CRP and ESR are often elevated. However, in the non-availability of microbiological and radiological data, both the tests lack specificity. The CRP test is more reliable than ESR for response assessment in the case of young children [24].

In approximately 50% of acute osteomyelitis cases, blood culture is considered as an essential tool for correct diagnosis of the infection [7]. The gold standard tools for the diagnosis include bone biopsy test with histopathological examination and tissue culture, (both aerobic and anaerobic bacteria culture). Furthermore, mycobacterial and fungal cultures should also be performed in case of any clinical doubts regarding the existence of the causative organisms [25]. However, if the infection is not suspected, then blood cultures are not helpful. In such cases, blood sampling is done at later stages of the treatment course.

Radiographic findings of osteopenia, sclerosis, and periosteal inflammation are seen in both stages of infection and infarction. Therefore, the radiographic features are nonspecific and primarily normal [26]. Other infection detection tools like ultrasonography (US) are also used for its advantageous features like portability, quickness, non-invasiveness, and better acceptability by the children [27]. The US shows the extraosseous pathology in acute cases and may also show periosteal elevation [28]. The US test exhibits 74% sensitivity in diagnosis osteomyelitis in SCA [28-31]. However, the main diagnostic finding, i.e., the presence of subperiosteal fluid, is non-specific and can also be present during VOC [28].

Another study showed the implementation of radioisotope imaging for detecting acute osteomyelitis. A combination of 99mTc-sulphur colloid and 99mTc-diphosphonate [32,33] or 99mTc with gallium seems to improve the test accuracy [34]. However, the test still resulted in false positives and false negatives due to which the health providers discontinued its use. Even radio-labeled leucocyte scans failed to differentiate between osteomyelitis and infarction [35].

Among all the detection tools discussed above MRI is considered as an efficient tool for the diagnosis of osteomyelitis in SCA patients. This is because MRI efficiently shows the pathological alterations even before they are detected on normal radiographs [26]. The accuracy of MRI can also be increased using gadolinium enhancement [13,36]; however, this does not guarantee 100% accuracy in distinguishing osteomyelitis from infarction [26,37]. For overcoming this limitation, MRI can be performed after obtaining the culture results for precise localization of the lesion and monitoring of the response of patients to various medications [38].

The microorganism detected in the blood usually determines the antibiotic choice. In the case of suspected or confirmed osteomyelitis, a third line cephalosporin, i.e., ceftriaxone, is used for treating Salmonella infections. Ciprofloxacin is considered as a suitable alternative for treating Salmonella infection in older children. In the case of adults, who have been infected with other species, such as Staphylococcus empirical antibiotic treatment should be followed [30]. In confirmed cases of osteomyelitis, a six-week treatment plan needs to be followed. If the radiographic imaging reveals fluid accumulation at the infection site, immediate drainage is recommended [30].

This mini-review presents one of the major manifestations of SCA, i.e., osteomyelitis. It aims at creating awareness about the wide range of symptoms and appearances for accurate diagnosis of the disease and plan for appropriate treatment modules.