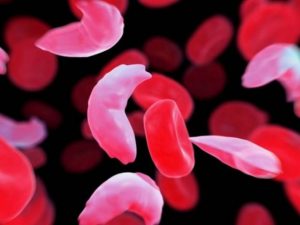 Bone Pain Crisis is the most consistent, a characteristic in SCD. The pain results from activation of nociceptive afferent nerve endings in the ischemic bones. The affected bones include the long bones such as femur and humerus, vertebrae, pelvis, ribs, and sternum. An early appearance of bone infarction is;the hand and foot syndrome. This is characterized by dactylitis involving the small bones of the hand or foot, marked by diffuse swelling over the involved area. It often resolves spontaneously within one to two weeks and is rare after 2-3 years of life. Frequency of bone pain crisis is higher in patients with homozygous sickle cell disease, low Hb F, and higher baseline haemoglobin. It is said to be more common in young adults but its frequency tends to wane at older ages. Pain episodes vary in intensity and tend to resolve within a few days. In about 57% of cases, no precipitating factor is identified. However, known precipitants include exposure to cold, dehydration, intercurrent infections such as malaria, physical exertion, tobacco smoke, alcohol use, hard drugs, high altitude, hypoxic conditions, physical pain, pregnancy, hot weather, emotional stress, or onset of menses.

Treatment Guidelines for Bone Pain Crisis are adequate analgesia, hydration, warmth, antibiotics, lots  of water fluid, not more than 1.5 times maintenance is given in order to prevent volume overload considering baseline anaemia in most patients .Patients and parents should be encouraged to keep a stock of simple analgesics at home in event of a painful episode.

However, mild to moderate pain that does not succumb to home-based oral analgesia and hydration within 2 days requires hospitalization.Analgesic should be given within the best possible time . Effective analgesic should be achieved within 1 hour. There should be an ongoing assessment of analgesic efficacy every 30 minutes until pain is controlled. The dose and choice of analgesic depends on the gravity of the pain. Non opoids like paracetamol may be used in mild Vaso-Occlusive Crisis. Opoids such as tramadol, DF118 (dihydrocodeine) are used for moderate pain while severe pain requires stronger opiods like morphine. Drugs  should be minimally used to reduce the risk of peptic ulcer and.

Treatment of acute sickle cell pain in a hospitalcomes out better due to prompt attention from medical practitioners ,but truth is , in Nigeria we lack good clinics and drugs for of sickle cell warrior.

Most importantly we should note that Bone crisis  may be complicated by a concurrent hyperhaemolytic crisis with results acute severe anemia or may even progress to acute chest syndrome or multi organ failure syndrome. Multiple organ failure is defined as sudden onset, severe organ dysfunction simultaneously involving at least two major organ systems (such as the liver, lung, and kidney) in the setting of an acute sickle cell crisis.It is explained by significant vaso-occlusive events in vital organs with major functional compromise and organ failure. This kind of  complication needs immediate intensive care and a multi specialist attention.