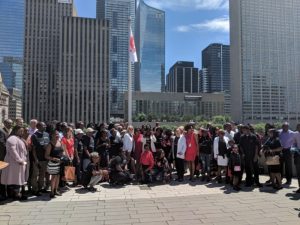 June 19th , 2018, marked the first recognized National Sickle Cell Awareness Day in Canada. The country is the first in the world to legally recognize the day. To honor its significance, the Sickle Cell Awareness Group of Ontario, also known as SCAGO, invited those affected by the disease, including patients and their loved ones, medical professionals, and dignitaries to take part in a flag raising ceremony and reception at Toronto City Hall.

Lanre Tunji-Ajayi, the CEO of SCAGO, welcomed the crowd on the podium roof of Toronto City Hall, where all were gathered to watch the flag of the Sickle Cell Disease Association of Canada (or SCDAC) being raised. SCAGO is a member of the national body, which regulates patient advocacy throughout Canada.

With the introduction of National Sickle Cell Awareness Day, those in the sickle cell community hope to increase visibility and knowledge of the disease. Groups that have been advocating for more knowledge of sickle cell disease, such as SCDAC and its member organizations like SCAGO have been working towards making National Sickle Cell Awareness Day a reality. Lanre told Toronto Caribbean Newspaper about how important it is to have an officially recognized day for sickle cell disease.

“It is monumental, not only for the Awareness Group of Ontario alone, but also for the Sickle Cell Disease Association of Canada that worked very hard on this bill, and also for the general sickle cell community,” she explained. “It’s a day that will open up a lot of opportunities for us in terms of awareness creating, in terms of education. Many of the care providers in this province still don’t have strong knowledge around sickle cell disease. When our patients present for treatment, they sometimes tag them as drug seekers. So, having more opportunities to raise awareness will really expose sickle cell disease to more people.”

Bill S-211 is the Act responsible for getting June 19th recognized as National Sickle Cell Awareness Day. Senator Jane Cordy and Member of Parliament for Dartmouth-Cole Harbour Darren Fisher introduced it in the Senate and the House of Commons, respectively. It received Royal Assent and became law on December 12th, 2017.

Senator Cordy expressed her satisfaction at the bill being passed but also stressed that more work needs to be done. “We’ll celebrate today, but there is a whole lot left to do. We need newborn screening for all babies,” she said to the crowd during her speech at the event’s reception.

The event also featured short speeches from several people in the sickle cell community. Patients, their family members, and doctors described their experiences with the disease, namely the struggles they experience to get healthcare practitioners more familiar with how painful a sickle cell crisis can be, as well as the need for a standard of care at doctor’s offices and hospitals across the country.

MaryAnn Gordon, who is the mother of a child with sickle cell disease, spoke to the crowd about the challenges her family faces, especially when it comes to taking her child to hospitals other than The Hospital for Sick Children. She recalled the times she had to take her child to a different healthcare facility, and her apprehension of the kind of treatment her child would receive there.

Sickle cell disease, the most common genetic disease in the world, is a hereditary blood disorder that results in red blood cells becoming sickle-shaped instead of round due to an abnormal form of hemoglobin. A healthy red blood cell carries oxygen around the body, while the red blood cells of a person with sickle cell disease can become stiff and block blood vessels. When these blockages occur, they can cause pain and damage to vital organs in the body. If a blockage becomes severe, it becomes a sickle cell crisis. Immediate treatment is vital in these instances, as long-term organ damage can occur from a crisis. A sickle cell crisis cannot always be avoided, but the risk of them can be lowered if the individual avoids triggers such as extreme changes in temperatures and dehydration.

Sickle cell disease can be found in people from all walks of life, but it is more commonly found in those with African, Caribbean, Middle Eastern, Mediterranean, South American, Central American, or Southeast Asian origins. It can also be found in those with roots in the Western Pacific Region. In Ontario, it is estimated that there are over 2,500 people living with sickle cell disease.

One of SCAGO’s goals is to educate the public about sickle cell disease and encourage everyone to get tested, especially those who are planning to start a family. Because carriers of the sickle cell trait are generally healthy and do not exhibit any symptoms, many carriers do not know about their status until they have a child with another person that is a carrier, and the child is born with sickle cell disease. SCAGO estimates that a staggering 80% of African-Canadians carry the sickle cell trait. Lanre urges everyone to find out if they are a carrier.

“Having a child with sickle cell disease is a very expensive venture that you don’t get into ignorantly. You may be a carrier and want to have your children with another carrier of the sickle cell gene, but at least it’s best to know before you go into that relationship to know what the prospect of you having a child with sickle cell is, and the options are that are available for you. But you won’t know all of that if you don’t get tested and know your own status first.”
Credited to:DELLIA RISMAY