I am a Sickle Advocate, a Warrior and the face of sickle cell.
My name is Onuoha Chinonyerem Obianuju. The first of five children from Mr Maurice and Mrs Angela Onuoha, 4 girls and a boy. I am from IMO state.

Unlike most unaware people, my Dad was aware of his genotype, but my mother wasn’t, she had to go for a test and was told she was AA. It was few years after my birth that they noticed me exhibiting some traits, and decided to go to the hospital. A genotype test was conducted and it was discovered to have the SS genotype. There began the journey of management and drugs, series of admission and blood transfusion. I became aware of my fate when I was 10years old. 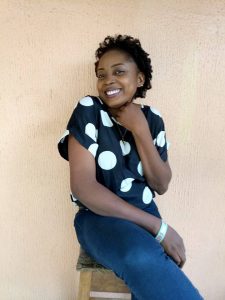 I attended Celia’s Montessori nursery and primary school, Rumuola Port Harcourt. I was always missing school because I was always in and out of hospitals. My parents kept searching for better ways and medications to manage it. It wasn’t easy growing up with SCD (sickle cell disease). I became aware that I couldn’t do some of the things other children did. It was difficult to accept that but eventually I did. It was annoying when everybody treated me like i was literally going to break if I did anything, but I understand now they were doing that out of love.

There were lots of challenges with my education as I would miss school and all. The day my mates where writing common entrance, I was on the hospital bed fighting for my life. I pulled through, got admission into Brainfield secondary and three years later I went back to write my primary six. (common entrance). My secondary education days wasn’t much of a challenge because I had come to understand myself, health and challenges.

After my secondary school, my parents insisted I attend a university close by so they could readily access me whenever my crisis came up. I gained admission to study food science technology at the federal polytechnic Nekede. After which I studied bio-chemistry at the federal university of Port Harcourt.

I got married at the age of 24 and also got pregnant. Everybody was scared saying I wouldn’t have the strength to “push” and many advised I deliver through C.S but I believed in myself and my abilities, I decided to “push”. I gave birth to a healthy baby boy, Unfortunately my marriage didn’t last. I was a victim of domestic violence, so I walked away from the marriage.

Discrimination  comes with its own baggage too, but I have grown passed all that because if people cant accept me,that is their own loss….relationships have not being that easy, neither has getting jobs been any easier. Above all, am stronger than the negativity.

Come May 2018, my son would be 8years old. He is as healthy and strong. I have been managing my health for years now, I have managed to stay out of hospitals. Yes I do have little crisis every now and then, but nothing serious. I’ll be 32 by March. I am currently self employed and reside in Port Harcourt.

I have learnt that we all will die someday, doesn’t matter if you are SS or AA. I have decided to create awareness and speak up. A lot of people are afraid of the stigma and rather die in silence. Silence is not the answer. So I have decided to inspire others, making them believe in themselves and not their limitations.

Keys to staying strong and healthy are;
• Eat healthy,
• Keep hydrated,
• Stay warm,
• take your meds and above all
• Believe in God.