Meet the beautiful US based Warrior, Sickle cell Advocate

Meet Mia Robinson a black American, who is based in Atlanta,Georgia; she is strong woman who has undergone some terrible complications in sickle cell and still standing tall. 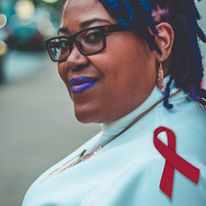 The Devil whispered in my ear “You’re not strong enough to withstand the storm.”

I was diagnosed with Sickle Cell disease at 6 months. My birth was fairly normal. Thank God because the man who delivered me knew nothing about Sickle Cell disease. I was starting to walk around 9/10 months. This is when I experienced my first sickle cell pain crisis. I had been out in the cold all day with my cousin who babysat me often. My mom had come to get me but noticed I would cry and scream in pain when she stood me up to walk. Can you imagine how frightened she was? She had never experienced this before either.

As a kid living with Sickle Cell, you don’t have a “normal” childhood. All my cousins my age were boys. I remember having a crisis simply from playing basketball with them. Never mind going swimming. No matter how hot it was outside, of that water was too cold, it would guarantee a pain crisis. Sometimes, it was worth it. In seventh grade, I climbed Stone Mountain on a class field trip. Guess what happened? I had another pain crisis. I think I was able to make it back down but I was no good days after due to being hospitalized. My first time ever being on airplane was only about an hour and a half to Orlando, FL to board a cruise with my family. Little did I know, how much the altitude affects the oxygen which in turn caused a pain crisis. Almost the whole trip was ruined.

As I’ve gotten older, I’ve had to fight even harder. Multiple laser eye surgeries and partial blindness caused by damage done to the retina. I suffered a mild stroke that I was unaware I had until two months later and I’ve had Both hips replaced before the age of 30 because of the lack of circulation to the joints.Now it’s attacking my shoulder and backbone. My spine is already built like titanium so that won’t be a problem.

I’ve also experienced a condition called IIH. In laymen terms, it just mean high brain pressure.This caused severe migraines, double and blurred vision, and the inability to keep anything on my stomach. I endured multiple spinal taps which caused numbness in my leg that’s still there 7 years later, a stay in ICU, and eye surgery to relieve the pressure and correct my sight. 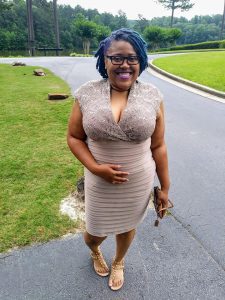 All this may have affected my sight, but it never disturbed my vision. Now at 34, I’m learning how to keep any illness from defeating me. The doctors found that the increased brain pressure was common among young overweight women and stress is a huge trigger for a sickle cell pain crisis. I managed to lose a total of 75 pounds after my ordeal with IIH and I make it a point to stay at peace as much as possible. I’m a firm believer that incorporating new lifestyle changes will prevent additional strokes as well as any other health complications. 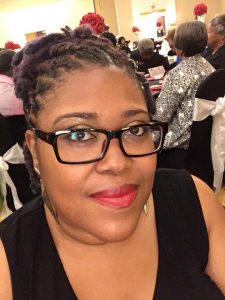 I’ve been in and out of hospitals by whole life. I wouldn’t wish Sickle Cell on my worst enemy and not even the Devil himself. Not because of the intense pain we go through but because they don’t deserve this strength. Despite what I still go through with Sickle cell disease and the fact that I live in some type of pain everyday, I stand here with a smile on my face, my back straight, and my head held high. Sickle cell is definitely not for the faint of heart. It takes an enormous amount of strength to surmount the things that Sickle Cell can and will do and I can attest to that.

So for that same devil that was whispering nonsense in my ear about my strength and not withstanding the storm, I whispered in his and confidently told him that I am the storm.

That is beautiful Mia’s story, Warriors; I hope this encourages you to stay strong.